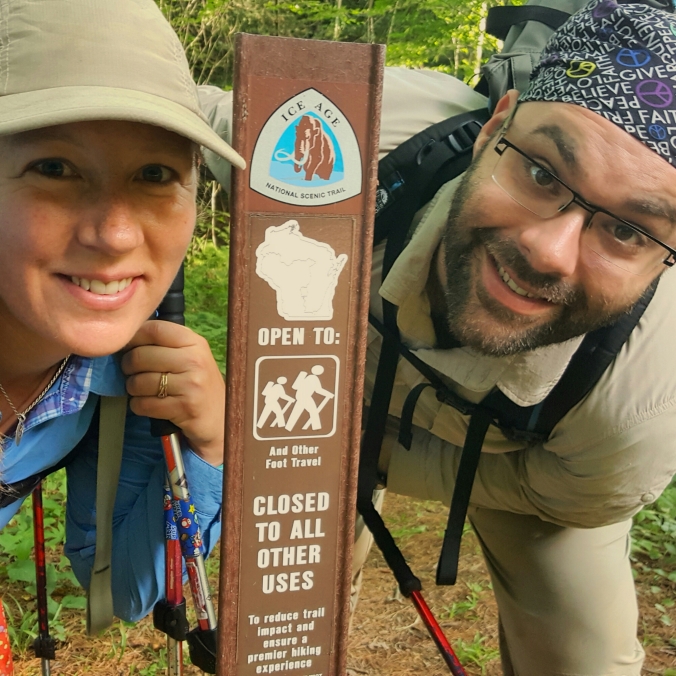 Toots and Aloha on the IAT!

Well, I guess Adam’s (aka Aloha) first multi-night backpacking trip was a success. I base this on a conversation we had on our last two miles, which I believe Adam initiated. “When we thru-hike the IAT, which direction should we go? Should we start from the east or west?” I walked behind him, and as he talked about another possible future hike – and a thru-hike, to boot – I just smiled.

I could tell he was feeling the previous two days’ miles because he was moving carefully and a little slower. A 13+ mile day on some pretty rugged, rooty and brushy terrain with a weighted backpack will leave anyone’s feet sore. Mine were, and when I felt like whining about it, I’d realize that he wasn’t complaining about anything. And this was his biggest hike so far. He was strong and just powered through the miles with the determination of, well, what I’ve seen and experienced as a thru-hiker. He’s a rockstar. I’m really proud. And excited. And happy. I love my newest backpacking bud! 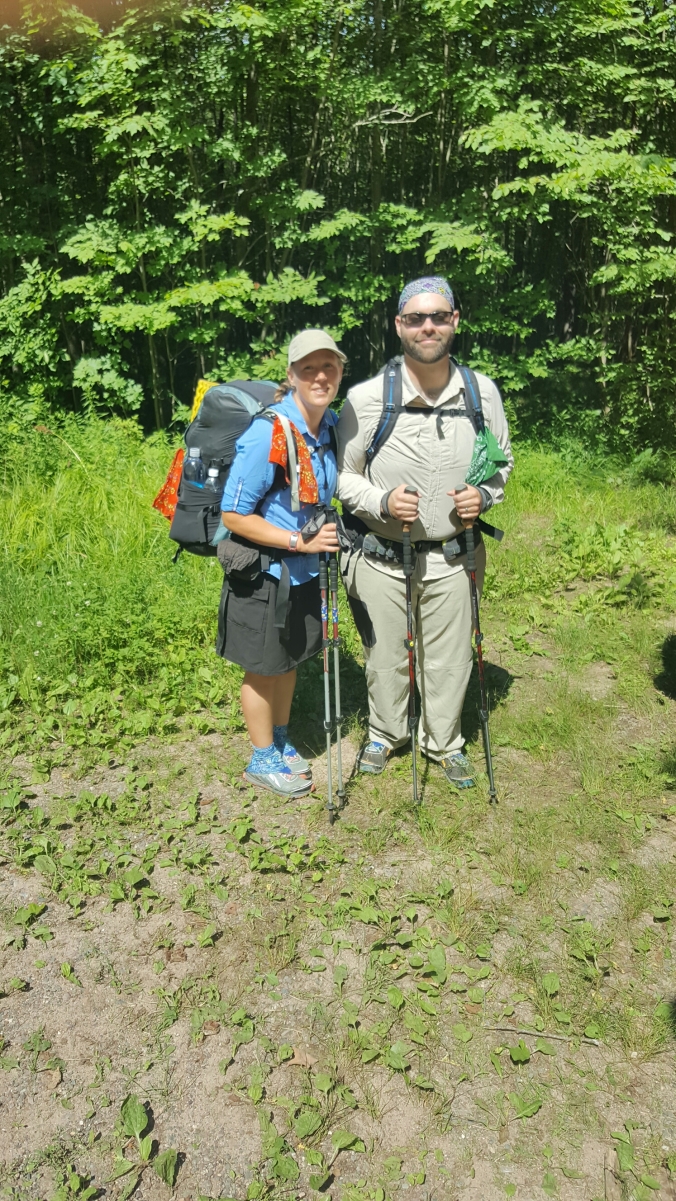 Fresh at the start, not stinky with sweat. Yet. Ready to hike!

We started Sunday night by organizing all of our food and gear for our three-day, two-night trek. Adam did a really amazing job choosing food fuel that was pretty minimally-processed as far as energy bars, snacks and dinners go. I didn’t do quite as well. Old habits die hard, so I had M&Ms and jelly beans (JBs) packed, among other things. But he did great choosing Quest bars, Beard bars, cashews and dried cherries, True Lime to flavor his stream water, organic Ramen, almond butter and honey, Epic bars for protein, Chia seeds… I dunno – I guess I’m just used to Snickers, gummy bears, Snickers, and Snickers to be the staple foods of a backpacker. But this newbie is teaching me as we go! Along with my JBs and M&Ms, I also packed some of these things, and it felt pretty good to eat some sorta healthier stuff on the trail, and I certainly didn’t feel deprived because it was all still super-tasty stuff. Our trail diet will never be perfect, nor would I want it to be, because Snickers bars will always exist, but it’s a good step. And, besides, that burger at the end of the trail? That beer? Those fries I’d been craving for 20 miles? Oooooh, they’re going to taste just that much better. Right? Well, it doesn’t matter what you eat on the trail. That burger will always taste good, so it’s kind of an unfair comparison anyway. Mmm. Snickers and burgers. Anyway…

So after packing everything into our backpacks – including food, fuel and two liters of water each – we weighed them. Adam was at 30 pounds, and I was at 36. These weights include a 10-pound battery and Adam’s C-Pap machine (Sleep apnea equipment). So we were thrilled to think of how low our base weights would be without that stuff. Not bad at all!

On Monday my dad drove down with us to the Mondeaux Flowage in Taylor county (Wisconsin) so we could drop our car at our end point. Then he dropped us off 21 miles down the trail at an Ice Age Trail road crossing and off we went. We got started around 3pm, but our loose plan was to get five miles in the first day, so we had time. I let Adam lead so we could hike at a comfortable pace for him, and we  ended up hiking a strong 2mph pace including breaks. We found a nice campsite after 6.3 miles and called it a day. Adam gathered firewood while I set up the tent. We made some dinner, had a little fire, then went to bed around dark. Then we watched a movie in the tent together, which is something I’ve never done in the backcountry. It was so much fun! We got so into the movie (American Ultra), that we kind of forgot where we were for a minute. Adam laughed once, and its echo through the woods snapped us back. Then a little while later we paused the movie to determine what kind of animal was cooing in the distance – it was an owl. It was a really cool experience, to be honest. Never thought I’d be a fan of tent movies, but I’d do that again! Not an every night kind of thing, but once in a while? A distraction from sore feet? Absolutely! 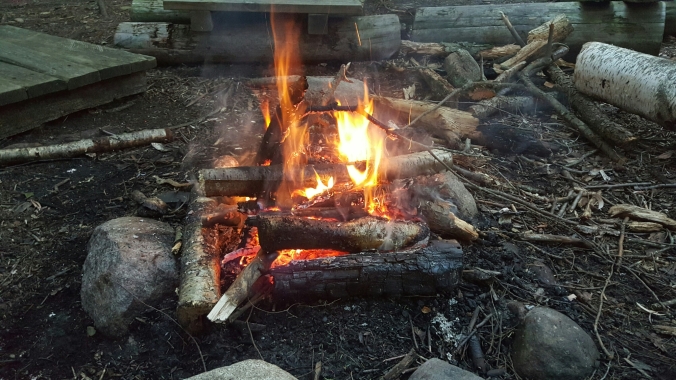 On day two we planned ten miles, and had all day to do it, so we slept in until about 8am. I gave Adam a quick lesson and some tips for pooping in the woods, because this would be his first time. It was a dry-run demonstration of sorts, if you know what I mean. Then I let him be with his freshly-dug cathole and wandered off to my own little spot. I was a little worried because this part of backpacking could be a deal-breaker if it doesn’t go well. I mean, it’s something you gotta do, and if you hate it… Well, that could be that. Thankfully it went okay. It gets easier with more practice.

After our morning bathroom duties were taken care of, we unstrung our hung food bags, had breakfast, broke camp and hiked on. As we hiked we talked, joked and laughed, and played 6 degrees of separation. Well, I gave Adam names of actors and he figured out their connections. I’m bad at that game. We hiked on through mud holes, along a mile-long esker (a glacial ridge), up and down some hills, over roots and rocks, through thick brush, along trail boardwalks, and through swarms of mosquitoes. At one point, Adam saw a group of mosquitoes fluttering around in a sunbeam and said, “they look like little fairies.” As I swatted one off my forehead I replied, “Yeah, sure. Vampire fairies.” So now mosquitoes will be forever known as vampire fairies.

We stopped for lunch at a crossing of the Yellow River. We gathered water from the river, and you know what? It was really yellow! How appropriate! It didn’t taste awesome, but it was filtered, bug-free and refreshing. Adam dumped some over his head to cool off – it was a pretty muggy day and the breeze just wouldn’t help us out. We sweat. A lot.

Our new Sawyer minis worked great on our yellow water. It was still yellow, and tasted… Okay!

We pushed on and decided to camp at a little campground about three miles from our car, but when we arrived, there was a sign saying it was reserved. The whole frickin’ place, which is like only four sites, but still. We were bummed. We were tired, and it was getting late. The folks staying there let us fill our bottles at the pump in the middle of their camp setup, and we secretly hoped they’d offer us a cold soda, too. They didn’t. We were sad. Then we hiked on into the setting sun.

About a mile in we finally found a nice stealth-camping spot just big enough for our tent and plopped down. It turned out to be a 13.1-mile day! I was able to get the tent up just as it got dark, but our dinner was rushed because an insane swarm, or tornado, of vampire fairies came out and tried to carry us away. It was insane, or at least we were by the time we jumped into the tent. I don’t think I’ve ever hung a bag of food so fast before! It was still hot, too, so we stripped down and lay there flat on our Thermarest mattresses, no sleeping bags, staring at the ceiling of our tent listening to the steady “buzz” of those little bloodsuckers out in the trees. Eerie. To add to the ambiance, a deer snorted and stomped a few times. Once we started to cool off we fell asleep.

In the morning we woke up early, packed up and hit the trail, eating our breakfast on the run. It was only 2 miles to our car, and before we knew it, we were there. We were parked by a lodge that had a little restaurant, but it didn’t open until 11am, so we jumped in the lake to cool off and wash the bug guts off of us, and then we sat at a picnic table and enjoyed 10am celebratory beers from our cooler. Once the restaurant opened we got cold Cokes, the Mondeaux burger, fries, and finished it all off with ice cream cones. It was delicious and perfect.

At the end, tired and ready for BURGERS!

After our burgers we hit the road, found a hotel room for the night, soaked in the hot tub, had some dinner, watched a movie, and enjoyed the giant, comfy bed.

Yeah, after a few days’ rest, I think I can get him out for another one. I hope so, because he’s my new favorite hiking buddy. I still love all my hiking partners, but you understand. Trail kisses and tent cuddles are nice.

I can’t wait until next time. We’re hoping for October. I’m sure you’ll hear all about it! 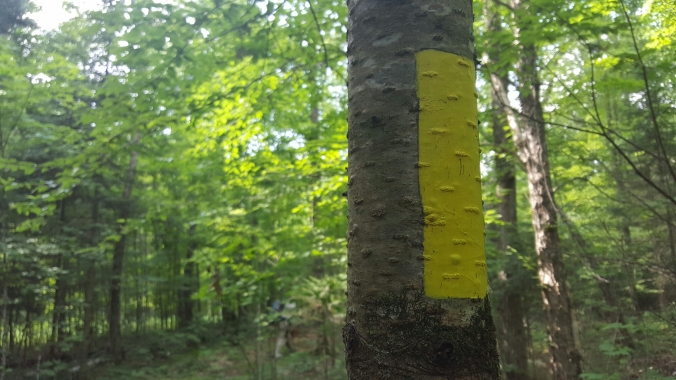 The most perfect trail blaze ever. Can a blaze be pretty? Yes. Yes, it can be.

We didn’t see any bears but we followed one’s tracks for about 2 miles! 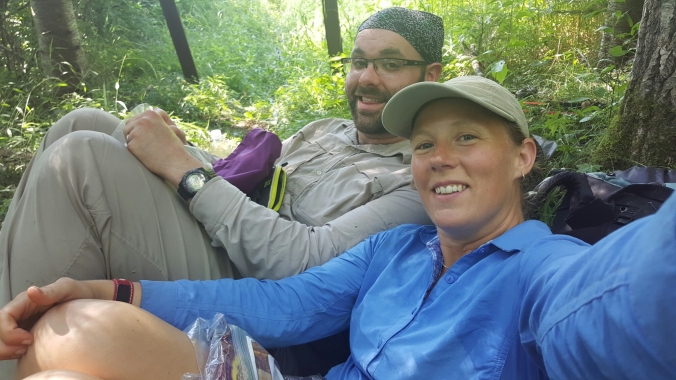 The water from the Yellow River was really that yellow. It tasted great on a hot day! 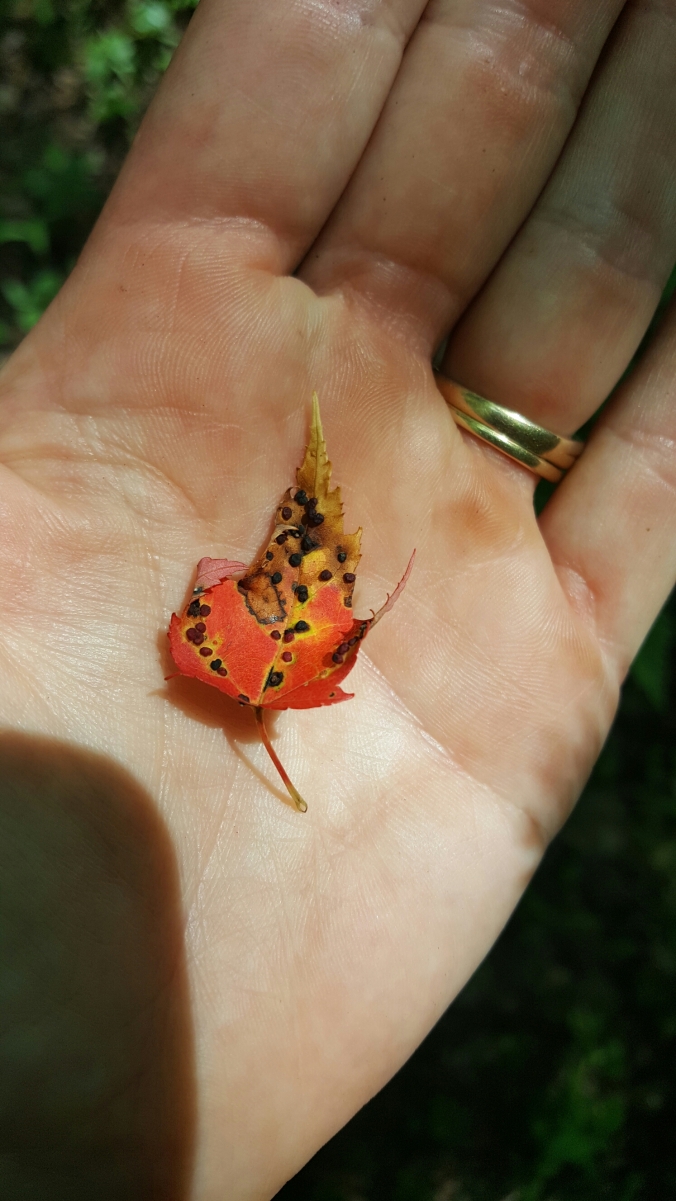 Just a pretty leaf. That’s all.

Aloha signing an IAT trail register. I love this. 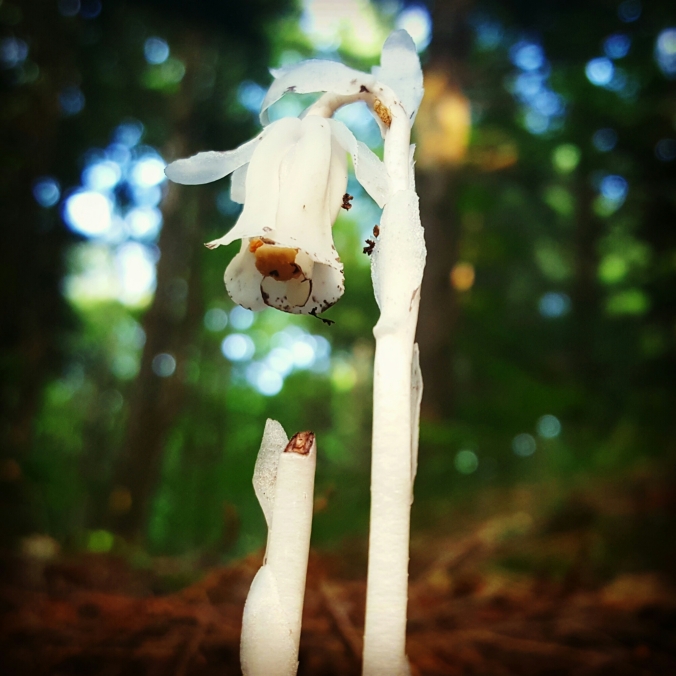 What is this super-cool thing? Orchid?

The world’s most perfect mushroom.

Adam almost ate him by running into his web. Thankfully that didn’t happen. 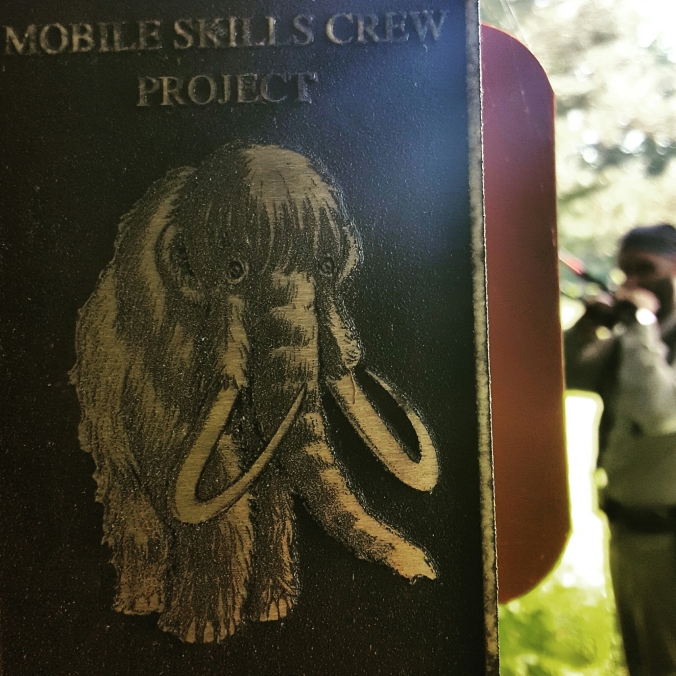 Adam is being all mammothy in the background.

Tonight, I love hiking with my husband. He’s Aloha. I can’t go wrong. :)